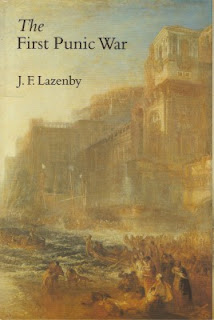 The First Punic War (264-241 BC) was the longest continuous war in ancient history and arguably one of the most important. Fought between Carthage and Rome, it marks the point at which Rome ceased to be an essentially Italian power and became one of the great powers of the Mediterranean world. However, despite its importance this is the first major study in English to be devoted entirely to it. One reason for this apparent neglect of the war may be the comparative lack of evidence, but as the author demostrates, a closer look reveals rich and varied source material. Based on a detailed analysis of the ancient literary sources, but drawing on archaeological evidence where relevant, the author presents us with the fullest account we have of the greatest naval war ever fought.
Unashamedly a narrative history, The First Punic War is an important addition to our knowledge of the emergence of the Roman Empire and as a work of military hostory it will become the standard history of the war. In addition it provides a fascinating case-study in historical detective work which raises fundamental questions about the nature of such evidence. This much needed and engaging book will he widely welcomed by scholars and students of ancient history.